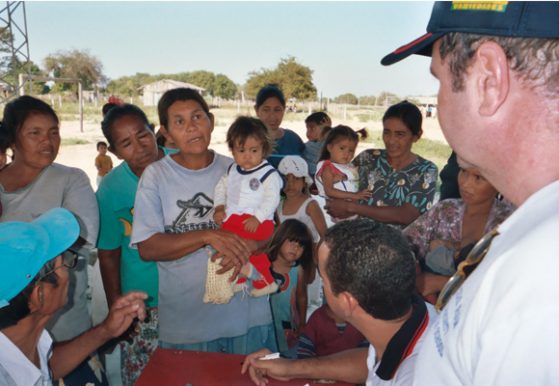 Deep in the heart of the South American continent, runs the great River Paraguay. Descending through the majestic Bolivian mountains, the waters make their way through the countries of Brazil, Paraguay and Argentina and enter the ocean just south of Uruguay. Along its banks reside many native Indians who make a living from the waters like the ancient Egyptians used to live off the River Nile.

Centered in the middle of three countries is a wildlife haven called ‘The Pantanal’ which serves as one of natures most protected areas in the world. The old town of Corumba that commands the area is situated on the Brazilian side of the Bolivian border.

As the River Paraguay meanders by the ancient town, it has over the years become the center of activity in the region. The Foundation for Healthcare for Humanity has naturally made Corumba its launching pad. Linking up with local pastors, the Foundation has made three trips to this place and used the river boats to accomplish medical outreaches.

After leaving Corumba, the riverboat entered into the jungle. It is the only way to travel in this area of a hot, wet and sometimes windy climate. Mosquitoes are plentiful and repellent sprays and long sleeved shirts are the rule of the day. The Indians living on the banks of the river dwell in remote areas and it takes many days to reach the first village. Two days downstream means four days upstream in the ‘old but still working’ river boats, but with great joy, we disembarked into the village of one of the neediest groups of people in the world.

Medical clinics were held in various places along the way back up river. The need of the people was overwhelming. All our team worked very hard to help the Indians with their health problems. Their main problem was their dirty water supply. Many illnesses were clearly attributable to worms. Apart from the obvious intestinal problems, the children were often losing their teeth due to worms eating the roots in their gums. In some villages, the people even lacked decent clothes and shoes.

Returning to Corumba, the team crossed the border into Bolivia. The difference between Brazil and Bolivia is huge. Immediately upon arrival, it is plain to see that Bolivia is a very poor country. The medical outreaches done here were expressly appreciated, for the Bolivians had the sweetest temperament that we had ever encountered.