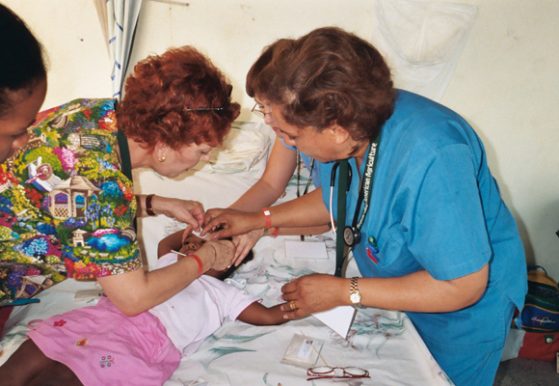 The Dominican Republic commands about two thirds of the ancient island of Hispaniola. Its capital, Santo Domingo, was a place that the explorer Christopher Columbus visited on the sea journeys of his life. Even today, his memory and accomplishments are honored in the Republic through the construction of a huge museum in his name. The Dominicans share their island with neighboring Haiti – a country of constant turmoil.

On the Dominican side of the island, the Foundation for Healthcare for Humanity has been able to make inroads into areas of great need. In September 2003, Board members made an initial visit to assess the situation and logistically prepare for the Foundation’s future medical ministry linking with pastors in the area.

In January 2004, the first medical team visited the country. Concentrating on the capital Santo Domingo and its environs, the team performed five medical foyers. Once again, the needs were great. The economy and healthcare has suffered in recent times. Many hospitals have little or no medicines. On subsequent mission trips, FHH visited some new districts in Santo Domingo and traveled further in the field. In addition, FHH has been able to send medical supplies to the devastated areas of Jimani. In response to the horrendous flooding that claimed the lives of hundreds, a container with medical supplies was sent to the local hospital in Jimani. Medical teams continue to visit the Dominican Republic yearly. FHH is making inroads in the most needed areas of the Republic.

While there have been political problems in the Dominican Republic, the country itself is still a lot better off than neighboring Haiti. There are many illegal Haitians now living and working in the Dominican Republic. Some of them have been there for years and their children have now become stateless people. They have no official papers from Haiti and the Dominican government will not recognize them. These poor people are largely living and working on construction sites and in the sugar cane fields. The FHH team is blessed to be able to minister to these disenfranchised people.

If Christopher Columbus could revisit his beloved “Hispaniola” he would cry tears of sadness.